This article was originally published by El Nuevo Sol

Professor Alberto Gutierrez has overcome many challenges on his path to becoming a professor, mentor and, most recently, to earning his doctorate.

Alberto Gutierrez has overcome many challenges on his path to becoming a professor, mentor, and most recently, earning his doctorate. Through it all, he has been driven by the hope of becoming the best teacher he can be.

“I don’t see myself as a ‘professor,’” he said. “I distinguished myself as a teacher because of the way I approach my classroom.” Gutierrez recently completed his Ph.D. in education at the University of California, Los Angeles, and currently teaches Chicano/a Studies at California State University, Northridge.

His passion for teaching began at the age of 17, during his first semester at Los Angeles Valley College when he took a Sociology and Chicano Studies class.

Gutierrez was born in a rural town in Zacatecas, Mexico called Tetillas, a town that still had no running water when his family left in 1977. “I still have memories of my mother going to get water, or walking around with a lantern. It was very rural, those are my roots,” Gutierrez said.

His family came to the United States when he was five years old and since then he has managed to help his parents. “The minute I crossed the border, I went from being a child in Mexico, to being in charge of my little brothers and sisters… So, I was like a second mother, second father, cooking and cleaning around the house. I had all these additional responsibilities that I did not have back in Mexico.”

The Gutierrez family came to the United States when he was five years old and since then he has managed to help his parents. Gutierrez’s parents have less than an elementary school education and continue to see the world through the lens of their village. Their hard work and determination to support their family helped them to do very well for themselves. Both of his parents still work and earn minimum wage.

“I feel very proud of him, because we had no childhood, no education. We had nothing,” Braulia, Gutierrez’s mother, said.

Gutierrez worked hard, helping his parents during difficult times to make ends meet. “We used to recycle everything from aluminum to cardboard… I was like seven or eight years old jumping into trash cans, collecting recyclables, and that was the beginning of hard work,” he said.

“Anyone that looked too Mexican, were getting picked on and it would lead to a fight. That really started all the violence for me, and later escalated to gang violence; a lot of fights at school, shootings, I was shot at, witnessed a homicide when I was 17 years old.” Gutierrez said. “Violence was a part of my everyday reality.”

During his teenage years, Gutierrez lost many friends to gang violence but he managed to survive. Many of his friends dropped out of school. After the death of one of his best friends, he decided to change the course of his life. He did not want to be another statistic.

“I was taking a shower, they had just killed one of my friends and I remember just feeling the water dripping off of my head, and just thinking… ‘Who’s next? Am I next?’ So, my dreams were always stunted by the idea of ‘am I next?’” he said.

His experiences not only gave him strength, but also provided him with a self-control to get him to where he wanted to be. He continued his education while his friends were falling behind. He managed not just to finish his education, but finish one semester early.

“Until now, I have not seen anyone who has done what he has done,” said his father, Cesario Gutierrez. “For me it means a lot because we have worked all our life until now. We still work, and when we brought him he was the first one who started working. He worked really hard and helped us.”

Gutierrez incorporates class activities in which students get the chance to know about each other and express their opinions.

Gutierrez’s passion is not only for teaching and writing but, recently, he found a passion for photography. He incorporates all components into his teaching to give students a different perspective in the way they learn.

“I realized, that’s the way life works. Whether I swing back or not, people are going to throw stuff back at me, so I might as well fight and a lot of that lesson is something that has fueled me in my convictions of social justice.”

His students benefit from Gutierrez’s insights and unconventional approach to teaching. “I really like his approach to class because its more hands-on. You get to learn through other peer experiences, so it makes you have a better understanding of the material; you grasp it more,” said Elora Barba, a 21-year-old Public Promotions major. “You get to work with everybody in the classroom, whereas in other classrooms you wouldn’t get that communication with your classmates.”

Gutierrez’s approach to teaching is not to lecture on a specific topic, but to give students specific tools that shift their paradigm, whether they do it in their class or through experience.

“It helps me, first of all, for later on. Like associating with other people, and having a connection, knowing other races and understanding who they are,” said Ruby Navas,18, Business Management major. Students engage in regular classroom discussions in which they all share their experiences. They get the chance to understand each other’s history and how that has changed who they are today.

Professor Gutierrez’s passion for teaching has not only allowed him to teach at the University of Southern California, but also in his native country. After many years, he got the chance to go back and teach in classrooms where he never thought he would have had the chance.

Gutierrez is mostly known by students for his fun activities and his laid back attitude. “My objective in class is to create life, to create energy, to create movement, to create interest,” he said. “I was 17 years old when I walked into a community college in 1991. That’s when I knew I wanted to be a teacher.” 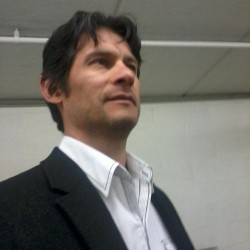